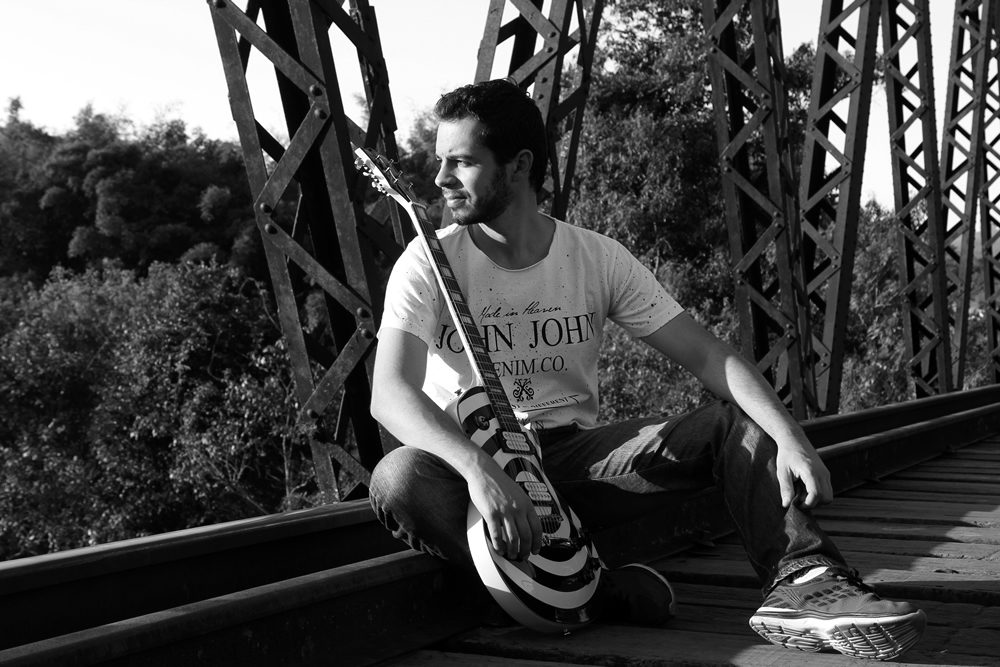 Hi there, this is Pedro!

I would like to share a little bit of my story with you.I was born in 1985 in São Paulo city - Brazil. When I was a kid, the only two things that I used to think about were: Soccer and Biking; although, I do remember grandpa playing parodies in the piano during family meetings, where we used to sing and play percussive instruments. It was so much fun!

My real musical interest actually came during a birthday party. Dad and his friends were playing some classic rock - And when I heard the main riffs of Satisfaction (Rolling Stones) and Smoke on the water (Deep Purple), I figured that music was even more fun than soccer!

Very shy, left-handed, holding a right handed guitar, my first experience on the instrument was a quite frustrating one. Despite my lack of abilities, I used to spend the afternoon struggling to "tame" that guitar. One of those days, I accidentally found a huge collection of LPs and magnetic tapes. A great sort of genres, albums, rare recordings of rehearsal or jam sessions... Good stuff!

Using some chords taught by my father, patience and my ears, my primary objective was to get as closer as possible to the original songs.

At 12, my parents gave me my very first Electric Guitar. My God, I was so happy! On my first try, adding the pick and overdrive pedal, I could finally get to "the tone" that I had been searching for.

At that time, I was invited to play in a School Festival. It took a lot of courage to step on stage for the first time, but once the first chords came out loudly from the speakers, shyness replaced the excitement I had felt.

A year later, I started teaching the little that I knew to my friends. It was a good way to recruit potential band members and force me to improve my knowledge.Still as a self-taught, I was searching for relations between chords and melody, without any idea of scales or arpeggios, for example. It made things hard and slow, but it eventually paid of. One day, a schoolmate who plays pan flute told me to apply to ULM test but I wasn't approved though and felt disappointed at myself, of course.I came back home even more determined to work harder. My friends couldn't keep the same chord progression for over 10 minutes. They started complaining, saying things like: "My fingers are hurting" or "That's why you ask me to come here?" Drama, drama, drama...

So, the only solution was to build my own backingtracks. Simple, isn't it? Well, it wasn't so easy because I didn't have any recording experience. One more thing to learn.

I was 15, when I got my first professional gig. Very low payment, but I felt happy about stepping in. Because of that, my abilities have increased dramatically, just like buying a new tool box. I had to be able to adapt, playing accordingly to different styles like Rock, Brazilian Pop Music, Funk, Soul Music, Samba...

Two years later, I initiated "Fusion Guitar" at EM&T. Music could be listened from every corner of that building, I used to spend the whole day on classes, workshops and researches. It was a great advance, because it was no longer necessary to discover the fire or to invent the wheel by myself. However, I didn't have any balance between technique and musical theory. I felt like a "one leg walker". To solve that problem, the only thing that I could do was, to take more and more classes about the subject. It was worth it!

I started learning and testing the MIDI language programing, using the Software named Cakewalk (this is old!). It didn't take too long until the first soundtrack requests come to my e-mail. Because the lack of experience in the business, there were some clients who didn't want to pay for my services, but I never missed a deadline. Back then, I realized that it would be vital to develop abilities on marketing, business administration, audio engineering... All of these subjects had to be combined in order to get the job done effectively.

The year after, I joined to bands "Art. 59" and "Morangos com Pistache", which made me care about appearance, style and posture. I wasn't used to worry about entertain the public, because I was used to focus on playing as perfect as I could. As a band member, this is not enough. It's necessary to see the bigger picture, promoting shows, trying to figure out what is the best way to approach the audience. There were a lot of awkward situations such as: playing close to stinky public restrooms, talking to drunk people, facing hostile audience, easy access to drugs and sex... Despite the fact that I was young, I've always tried to see it as a professional musician and not as a Rock Star. I know, it seems kind of boring, but it was a good way to keep myself away from trouble.

At the same time, I started teaching electric guitar for beginners. Over 3 years, I developed a methodology which had well-defined criteria. Every single student has particular interests, goals, abilities and points to improve. So, all the classes have to be based on that.

In my point of view, since the result had been satisfactory, I decided to offer my services to musical schools in the neighborhood, being rejected or ignored in many of them. What did I expect? But then I got offered a job as a receptionist at the "Cia da Música". It wasn't what I really wanted, but it brought me experience on sales and customer service. I took it seriously and worked hard to learn everything I could. It didn't take long, until I got promoted to Audio Technician in there. This was one of the first musical channels in Brazil.

I felt the urge to improve in audio capturing and edition, since I would have to record excellent musicians. 90 per cent of my salary was committed to pay my studies on IAV (audio fundamentals), and I was so focused, that I barely touched my guitars for a year.

Encouraged by the good results, I produced two albums in 2010. One of them is "Pedro Pimentel", a Guitar Solo. I recorded all the instruments and tried different recording techniques. The Central idea is video game soundtracks, especially 8 bits based on the 80s and 90s songs. As a child, I remember I used to pay attention to the details and weird tones, and that made me think that music transcends technology limitations.

After that, a few local metal and rock bands hired me to produce their records. Without good equipment and a proper acoustic room, those musicians were looking for a special attention and free possibilities to innovate. They didn't want a producer dictating what they should do. No, no, no... They wanted someone who could make possible turn their ideas into an audio track. Over the course of 2 years, 28 albums were produced.

I was 25 when I was invited to work as a teacher at Venegas Music (music school). Honestly, I had given up on this idea already. But, this guy Ivan Barasnevicius, believed in me. He gave me a shot, when no one else did, so I would never disappoint me or him. I've always knew that I have what it takes to teach, because I love it and not because people say so.

At the first day on my new job, I got a valuable advice from my coordinator "Débora Bermudez": "listen to what your students have to say and relax". Although it seems quite obvious, sometimes we get nervous and forget to pay attention to the signs that the students send. Every person is unique and this is fascinating! I started with 2 students, the week after there were 10 and a month later 20!

There's a lot of music teachers, that need to cancel classes because of their gigs. I'm not judging, I perfectly understand it, and I've been there sometimes. However, it causes trouble to the school and the students, we can't deny it! So, I decided to prioritize my job as a teacher, because I wanted to achieve excellence. The other activities should be adapted to fit.

There is another particular characteristic which I developed. It may look a little bit weird, but it's very effective. I am used to spend some time to learn everything that I can about my students. Something beyond their favorite bands, musical genre, etc. I'm talking about getting information related to their professions, hobbies, reading their favorite books, playing their favorite games... Sometimes it does feel odd, especially when I watched Pokémon episodes, red Twilight, chose a fishing magazine to read at the Dentist's waiting room... But it really pays off!

Knowing a little bit about those subjects, helps me to build a stronger communication. Furthermore, it's very inspiring, to know how the people live, think, and what makes them happy.

I could talk about this for hours, but I am supposed to finish this Biography, remember? But I couldn't talk about my life without showing you how important the participation of people is in it. I just gave you a small sample.

The next chapter is being written at this exact time, and perhaps you come to be an important character of this or many other stories. If we meet, I hope that we can share good moments. See you!